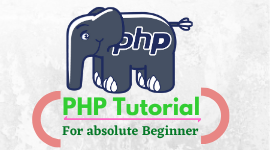 In this tutorial, you will learn what is PHP variable and how to use it.

Variables are nothing but the name of the memory location. Variables store different kinds of data like numeric and non-numeric data. Values in the PHP variables can be changed during the course of the script. Below are some of the important features of PHP variables:

Syntax of declaring the variable in PHP is as below:

In the above example, we have created two variables and assigned them with number and string values. After that, we have displayed the variable values using the echo statement. PHP echo statement is used to get output data to the browsers. We have already learned about it in our previous tutorial.

Below are rules for defining PHP variable: