Teradata can handle large volumes of data quite easily. Teradata archives this by using the concept called pluralism. Teradata is developed by a company called Teradata.

Our Teradata tutorial is designed for both beginners and professionals.

Teradata, developed by Teradata Corporation, is one of the most popular RDBMS (Relational Database Management System) in the field of data warehouses. This was mainly designed for developing large-scale data warehousing applications.

Initially, Teradata was a part of NCR Corporation which was incorporated in 1979. It was parted away from NCR in 2007.

Following is the summary of the major milestones of Teradata.

There are plenty of reasons to choose Teradata over other database systems for large applications. 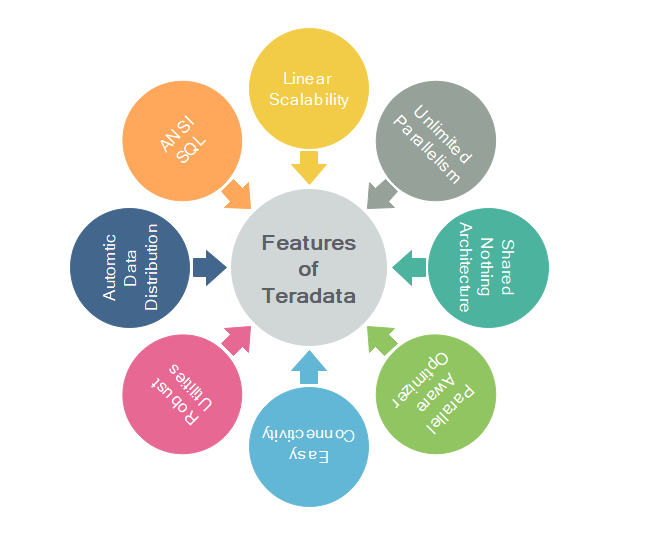 Scalability defines to increase the processing power by increasing the hardware configuration. Teradata is a highly scalable system. They can be expanded up to 2048 nodes and creates a highly powerful database system. For example, 4 nodes system is double-powerful than two nodes system with the same node configuration.

The architecture of Teradata is built on massively parallel processing (MPP) which helps to execute any task in a faster manner. MPP architecture divides the task evenly across the entire system. Teradata system splits the task among its virtual processes (AMP) and runs them in parallel to ensure that the task is completed quickly.

Teradata system is a shared-nothing architecture in which each node is independent and self-sufficient. Also, each logical processor (AMP) is responsible only for its own portion of data.

Teradata provides one of the most advanced optimizers in the market which is built to be parallel since its inception. The optimizer is also refined in each release.

Teradata automatically distributes the data evenly to the disks without any manual intervention.