C Language programming tutorial with programming approach helps you to understand each topic easily in great detail. Our C language tutorial explains each topic with examples.

One can define C language as follows: 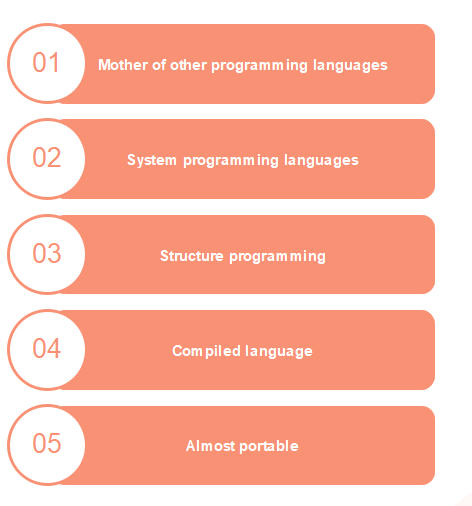 1) Mother of other programming languages

C is considered the mother of the modern language because most of the compilers, kernels, system programs are written in C. Also many programming languages like C++, Java, Perl, Python, PHP, etc. directly or indirectly borrowed the syntax from the C language.

Apart from this, the concept like file management, Memory management, Array, pointers is the base for other programming languages.

C is called structure programming language as we can break the C program into parts using many functions.

It makes the program easier to understand.

C is called compiled language. This means that once you write the C program, you must first compile it using C compiler.

After compilation of the program, the compiler will make the executable form from the human-readable format.

One can make the  C program portable if the design of the programming has been made keeping portability in mind.

Otherwise, it may need small modifications before running it to the other platform.

C was originally developed by Dennis Ritchie between 1969 and 1973 at Bell Labs.

C was mainly developed to re-implement the Unix operating system and since then it became the most widely used programming language.

C has been standardized by American National Standards Institute (ANSI) in 1989 and later by International Organization for Standardization (ISO).

There are many C compilers are available in the market. Turbo C, Turbo C++, GCC C are the name of a few.

Following is the basic hello world program in the C language. All the programs given in our C language tutorial are compiler with C compiler so that you can change the code as per your need and learn in a better way.

A detailed explanation of the above program is given in the later chapter.